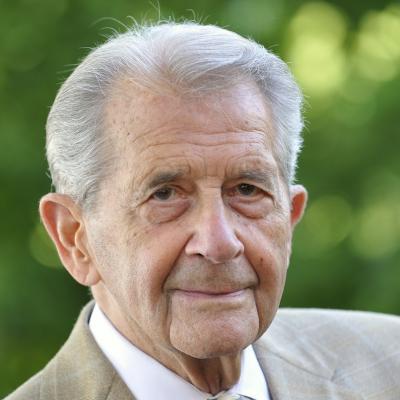 Mourning the Loss of a Longtime Trustee

Burton D. Morgan Foundation mourns the loss of our longtime Trustee, Stanley C. Gault, who passed away on June 29, 2016. Mr. Gault joined the Board in 1994, at the invitation of Burt Morgan, who fully expected to be turned down by this iconic leader of some of the nation's most revered corporations including General Electric and Rubbermaid. At the time, Mr. Morgan confided in trustee Marty Erbaugh "I don't think he will do it. He thinks in billions; I think in millions." Instead, Stan Gault, an exemplar of high achievement, integrity, and humility, surprised Burt Morgan. He agreed to serve on the Board, a role he fulfilled with distinction until his retirement at the end of 2015.

In September of 2015, a small group of friends, family, and colleagues joined Foundation Staff and Trustees at The Wooster Inn to celebrate Gault and his many years of exceptional service. Foundation President and Chief Executive Officer Deborah Hoover presented Gault with a proclamation adopted by the Board which praised Gault for his sound judgment, outstanding leadership, and unwavering dedication. After each Trustee offered his own individual tribute, Board members treated Gault to a rousing rendition of "For He's a Jolly Good Fellow."

Deborah Hoover commented, "Our Trustees aptly captured Mr. Gault's role on the Board in their Resolution of Appreciation stating that, 'Mr. Gault has guided the evolution of the Foundation through steadfast contribution of his wisdom, time, and many talents over more than two decades, freely sharing his vast experiences and frequently mentoring others. He has exemplified a generosity of spirit and deep understanding of critical issues that promote the mission and ethos of the Foundation and serve as an inspiration to others in the philanthropic community.' All of us at Burton D. Morgan Foundation are grateful for Mr. Gault's extraordinary contributions to our evolution and for his engagement as Trustee Emeritus."

Stanley Gault graduated from The College of Wooster and had three distinguished business careers: Senior Vice President of General Electric Company; Chairman and CEO of Rubbermaid Incorporated; and Chairman and CEO of The Goodyear Tire & Rubber Company. He was a Director and Chairman of the Board of Avon Products, Inc., and a Director of The New York Stock Exchange. He also served as Chairman of the National Association of Manufacturers. Gault was Chairman Emeritus of the Board of Trustees of The College of Wooster.

Trustee Richard Seaman recalls that Stan Gault personally recruited him to join the Board and in recent years, he provided Gault with transportation to Board meetings. Seaman remembers those drives with fondness. "It's an extraordinary privilege to spend a couple hours with one of the top business minds in the country," he noted.

Hoover was among the fortunate professionals for whom Gault provided mentorship over the years. She expressed her gratitude to Gault as follows: "When Stan Gault called the office, no matter what else was happening, I excused myself and took his call. He always had an important message to convey and you can be sure that I listened carefully. With all his experience and major commitments, he took the time to ensure that he counseled me when the going got tough, congratulated me when I got it right, and shared pearls of wisdom that guided me in daily decision making. I will be forever grateful for his friendship and tutelage, and will never forget all that I learned from him. Our Foundation has lost a pillar of strength and wisdom and all the trustees and staff who worked so closely with him will deeply miss Stan Gault."

Remembrances From Our Board of Trustees

It was such a privilege to share 'one on one' time with Stan, particularly those times we spent together driving between Wooster and Hudson to attend the Morgan Foundation meetings. I enjoyed hearing stories about Stan's career and exchanging views about current challenges facing the Morgan Foundation, the College of Wooster, and our country's economic and political future.

While I was chagrined about his failing physical health in recent years, I marveled at his sustained mental capacity. Stan missed very little and always had an insightful opinion about any issue we discussed. He continued to be generous with not only his financial resources but, just as importantly, with his time and leadership talent.

My father passed away at the young age of 55. In many ways, Stan served as a father figure – not so much in the time we spent together but more so in his genuine interest in Judy and our children and our growing family business. He will certainly be missed by all of our family.

I remember meeting Stan Gault when I was 16 years old and would visit the Rubbermaid offices on Saturday mornings with my father, a VP at Rubbermaid.  Mr. Gault always took the time out of his busy schedule to ask questions and give me direction. His generosity of time in developing great people was endless. His inspiration and examples of leadership produced many effective protégés around the world. They will undoubtedly carry on his legacy indefinitely.

It was an honor to reconvene with Mr. Gault many years later as a fellow Trustee for Burton D. Morgan Foundation.   Stan will be missed as a friend and mentor, but never forgotten.