What Happens When the Liberal Arts and Entrepreneurship Meet?

In 2006, Burton D. Morgan Foundation embarked upon what would prove to be a transformative initiative – for us and for the regional entrepreneurial ecosystem. In partnership with the Ewing Marion Kauffman Foundation of Kansas City, Missouri, we launched the Northeast Ohio Collegiate Entrepreneurship Program (NEOCEP), a $6.6-million program to encourage entrepreneurship in higher education.  NEOCEP, part of the ambitious Kauffman Campuses Initiative, had the unique focus of supporting cross-campus entrepreneurship at liberal arts colleges in our region. The brief ten-year retrospective on NEOCEP that follows is disseminated through the Foundation’s research arm, Entrepreneurship Education Experiment (E³), whose mission focuses on sharing the lessons we learn about best practices in entrepreneurship education.

NEOCEP was a bold experiment, an entrepreneurial endeavor in its own way, testing the hypothesis that students pursuing a liberal arts education might build upon this strong foundation through the study and practice of entrepreneurship. Indeed, studies have shown that a liberal arts education is actually great preparation for the interdisciplinary world of an entrepreneur. Seventeen private, independent colleges and universities in Northeast Ohio were invited to consider the challenge, with 11 applying.  Following a rigorous selection process, five institutions were ultimately chosen to participate, each designing an entrepreneurship program that built upon its unique culture. Program investments from the two foundations began in 2007 and continued until 2012, leading NEOCEP to transform the colleges and the Foundation – even impacting the regional economy. The program “allowed entrepreneurship education to move beyond awareness and into a part of the institutional DNA” of these schools, according to dissertation research published by Michael Schneider, Ph.D., the president of McPherson College.

NEOCEP would lead to the genesis of an expansive peer-to-peer learning community on entrepreneurship education among institutions of higher learning in Northeast Ohio. Lessons learned from the partners created an intellectual infrastructure that spawned multiple learning communities, such as JumpStart’s Higher Education Collaboration Council.  It also laid the groundwork for the Foundation’s subsequent collaboration with a second national foundation, Blackstone Charitable Foundation, on Blackstone LaunchPad and its successor, NEOLaunchNET. The result: experts say Northeast Ohio’s collegiate entrepreneurship ecosystem is now among the most vibrant in the country.

Five Northeast Ohio colleges and universities implemented NEOCEP on their campuses ten years ago.  Click on the links below to explore the impact this program had on each campus, through retrospective essays produced by the schools and by the Foundation.  For additional perspective, read essays written by the schools and Foundations at the conclusion of the program in 2012. 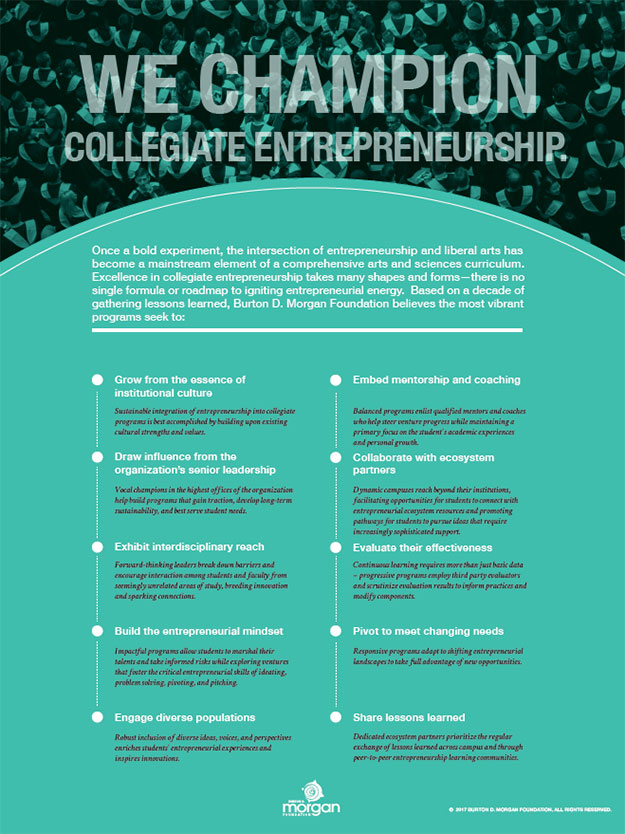